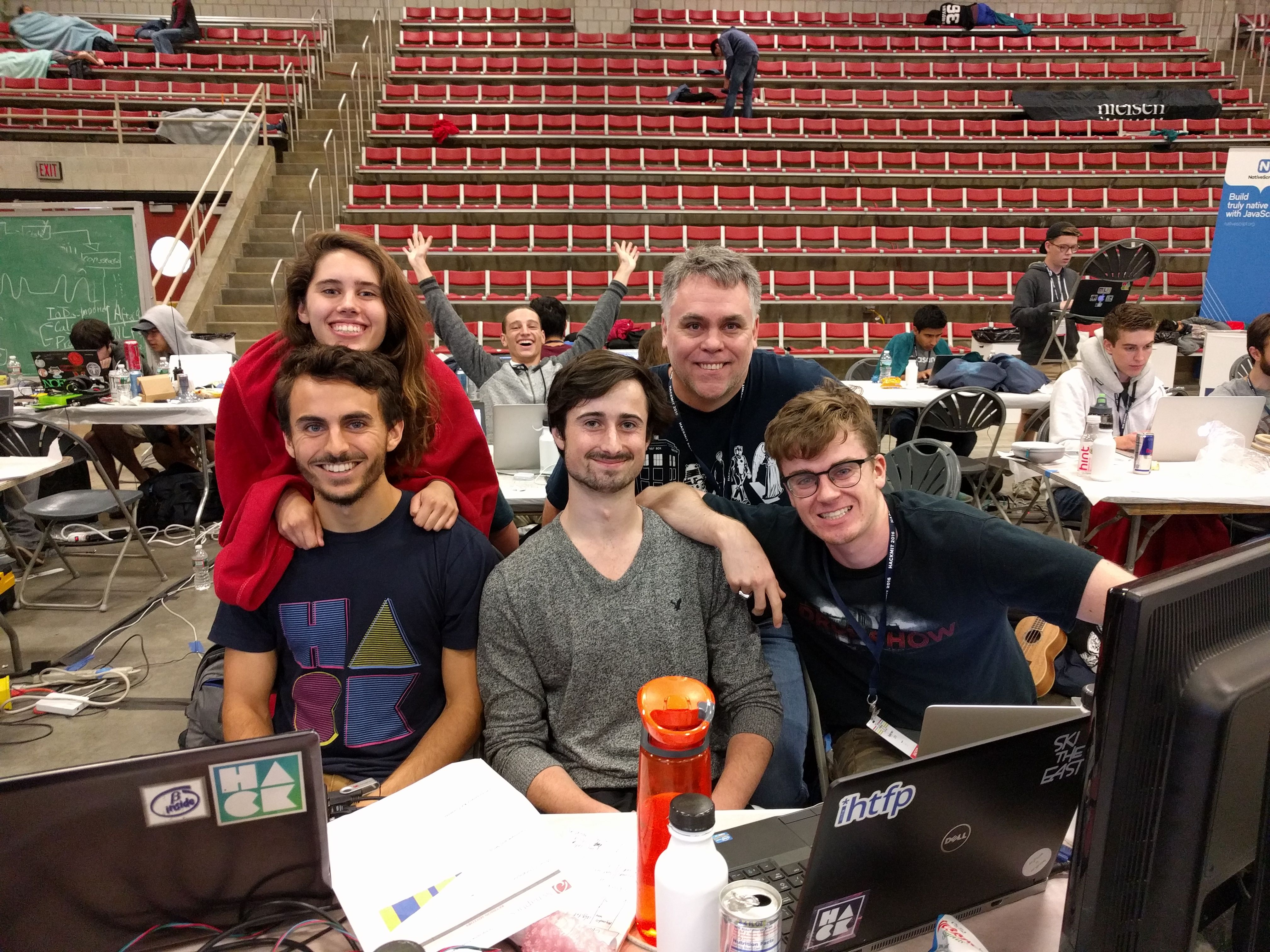 This post was originally published on the Fedora Community Blog.

HackMIT is the annual hackathon event organized by students at the Massachusetts Institute of Technology in Cambridge, Massachusetts. HackMIT 2016 took place on September 17th and 18th, 2016. This year, the Fedora Project partnered with Red Hat as sponsors for the hackathon. Fedora Ambassadors Charles Profitt and Justin W. Flory attended to represent the project and help mentor top students from around the country in a weekend of learning and competitive hacking. Fedora engaged with a new audience of students from various universities across America and even the globe.

The Fedora team arrived in Massachusetts a day early on Friday to ensure prompt arrival at the event the following morning. Fedora was one of the first sponsors to arrive on MIT’s campus Saturday morning, and scouted one of the best positions on the floor. Fedora was given a choice of anywhere in the bleachers surrounding the floor. As a result, the team set up Fedora’s banners close to many of the tables where hackers would spend the weekend.

On the morning of the first day, over a thousand students arrived on the MIT campus. Around 10:00am, the kickoff ceremony began in the main auditorium. The event staff introduced themselves and the structure of the event. After covering the basics, every sponsor was given a 30 second “elevator pitch” to explain their company or project, and share anything important with the hackers. Justin represented Fedora and Red Hat on stage to introduce Fedora and what Fedora wanted to help students with. He introduced Fedora as a distribution targeted towards developers, briefly introduced the three editions of Fedora, and offered help for anyone wanting to open source their hack or seek support with open source tooling.

May the hacking begin!

After the sponsor introductions, hackers relocated to the main floor to start seeking teams and begin working on projects. While HackMIT was getting into full swing, many people visited the Fedora area before jumping into a project. Many of the students who talked with Charles and Justin were either surprised to see Fedora at an event like HackMIT or were curious to know what was going on in Fedora. For the most part, many students were familiar with Linux through classes or lectures. The ones familiar with Linux knew about it from hands-on experience or from guided instruction in classes. A smaller number of people were running Linux environments or using them in servers or other ways.

Overall, the demographic of people attending the hackathon were generally familiar with Linux, but not at an advanced level. This group was ideal for promoting Fedora as a developer environment. The ease of setting up a development workspace or installing dependencies for projects intrigued many students. HackMIT was an ideal opportunity to present Fedora to a new group of budding technological enthusiasts. HackMIT participants had an organic interest in Fedora and wanted to know how Fedora made development easier or what made it different from other distributions.

During the event, Charles walked around the various tables to talk with students while Justin manned the Fedora area. Charles introduced himself to the hackers and asked to know what they were working on or what their plans were. For many teams, he provided advice on how to get over hurdles with first planning and project direction. He checked back in with these groups across the weekend to see how they progressed.

At the Fedora space, Justin fielded questions from students about Linux, what Fedora offers, and about open source software. Some people were familiar with Fedora, and a small handful of students were running Fedora as a primary operating system. However, most students were only familiar with Linux and were curious to know more. As a student, Justin offered specific advice about contributing to open source software and how helpful it is to gain real-world experience. Some students expressed interest in contributing but were unsure about where to start. Justin coached students through key steps to start with on beginning their open source adventure. He identified the process of choosing a project to contribute to, matching something genuinely interesting with technical skills, and getting involved with the community.

Additionally, there were two students organizing other hackathons in the country with a specific focus towards open source software development. The Ambassadors engaged with these students and joined in a dialogue about making open source a critical part of hackathons. More information about these events will become available in the coming future.

To help gauge our impact with the event, there was a limited edition HackMIT 2016 Attendee badge that attendees could claim during the event. The team leveraged Fedora Badges as a tool to help tell the story of our impact at the event. Through Badges, you can see a list of FAS accounts that claimed the badge from the event and their account activity in the long run. Bee Padalkar‘s FOSDEM event evaluation demonstrates how this data can be used. Ten people claimed the badge during the weekend. One of the benefits of using badges as a tool for measuring impact and engagement is the follow-up it allows us to make with what badge claimers do in the Fedora community.

However, there were more ways to measure engagement with the students and hackers than only with badges. Many of the most valuable insight into our impact was follow-up on the second morning. Charles went around to most of the tables he visited on the first day leading up to the final deadline. With one team, he helped do some live testing in the last 30 minutes before the deadline since her team was asleep from the previous night. Engagements like these left a positive impression of Fedora, and by extension, the community.

What was our engagement?

The type of interactions and conversations Fedora held with students and other attendees was productive and motivating, not only to the students but also to the Ambassador team. People were genuinely interested in Fedora and it was easier to shape their interest into an insightful discussion about what Fedora enables students to create and develop. A powerful message about open source software development was also delivered during the event. This stands in contrast to some other hackathons in the United States which are sometimes set up more like unofficial career fairs. HackMIT clearly held a strong focus on community. Events with that kind of management and direction are where Fedora succeeds and has a more valuable impact.

Leaving the event, the Fedora team was confident that we had a powerful impact on students during the event. For many, Fedora was not only introduced as an operating system, but as a tool for accomplishing and doing. Fedora provides the tools and utilities students need to build their projects and drive them forward. Open source as a development practice was also introduced to many for the first time, or deeper explained for those with a mild interest. These messages and the team’s other engagements were warmly received.

The Fedora Ambassadors of North America would like to make a special thanks to Red Hat and Tom Callaway for partnering to sponsor this event. Without Red Hat’s help, attending this event would not have been possible. Our engagement and impact after HackMIT excites the Ambassador team. We hope many students from the event turn to Fedora not only as an operating system, but as a tool for their expanding technological toolbox. A congratulations also goes to the organizers of HackMIT for putting together a thoroughly planned and carefully executed event that placed a strong focus on community, which fits within one of Fedora’s four key foundations, Friends.

We hope to return to Cambridge again next year!

You can read Charles Profitt’s event report on his blog.