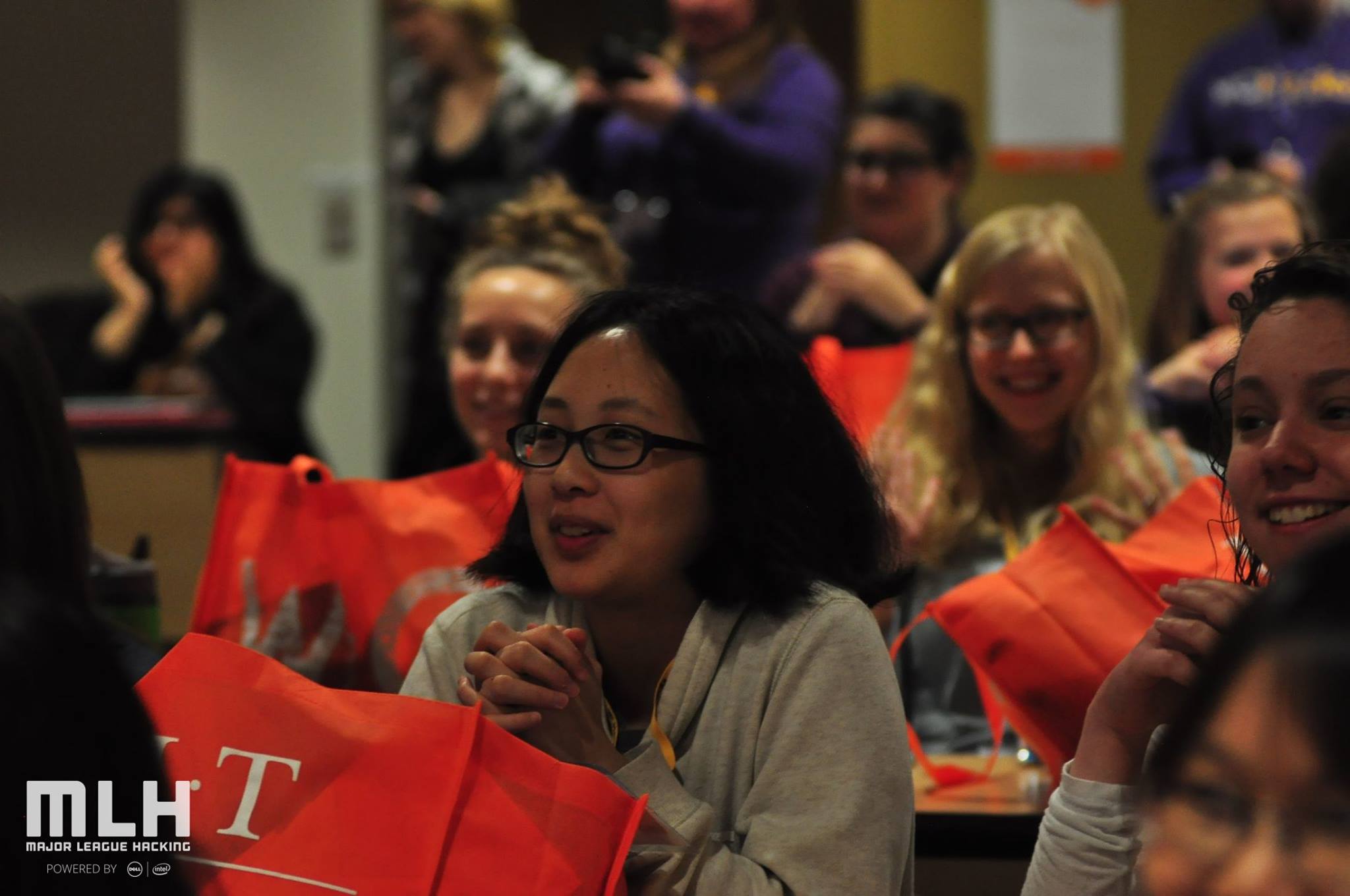 Two weekends ago, from February 27th to the 28th, the Women in Computing program at the Rochester Institute of Technology hosted their third annual WiCHacks hackathon. WiCHacks is a women-only hackathon open to university students and high school juniors and seniors. WiCHacks is a collaborative event bringing women together from across RIT, the country, and even the world (including attendees from Germany). The participants are in a supportive and empowering environment to build something awesome and present it to everyone else in the span of one weekend.

So why am I writing about WiCHacks? I signed up as a volunteer for the event this year. I would help with the setup, running the event, and packing it up. During my experience as a volunteer, I met some other awesome people, saw some really cool projects, and discovered an inviting and inclusive community on campus.

Opening the doors for WiCHacks

After grabbing a quick bite to eat, I began helping with setting up sponsor tables, moving equipment and tables around, and other miscellaneous tasks to prepare for the first influx of people, scheduled to arrive around 10:00am. After two hours of setting up, the hackers began streaming into the Golisano building and filling the atrium. As more and more people began to roll in, it was awesome to see how diverse and culturally unique the room was. There were people of all races, from all over the country and even the world, that had come here to join other women hackers in a weekend of creativity and fun. With such a wide palette of culture and ideas, I was anticipating to see some awesome creations in my time volunteering.

After an opening keynote by the WiCHacks committee leader Susan Heilman kicking off the hackathon, the hackers were served a quick lunch before jumping into brainstorming and programming.

For those who had never programmed before, there was a special Newbie Track that aimed to help teach some of the basics. It helped give girls who didn’t know anything about programming a booster to also create something during the weekend.

GO HACKERS GO! There are 117 people listed as apart of teams already make sure you register your team #wichacks #soundoff

After lunch, the hacking began! Teams could go into a room and have access to whiteboards, plenty of chairs, and outlets to charge devices. If needed, Major League Hacking also had a hardware lab where people could rent out laptops and other accessories during WiCHacks.

After my volunteering shift ended, I had a homework assignment for one of my classes due at midnight. I had made plans many months ago after 7:00pm that night, so I had to work on the assignment that day to submit in time. I went up to an empty IST department lab, fired up my laptop, and began working. Suddenly, a team of five girls walked into the lab and began setting up close to the whiteboard near me.

I was curious after a while to hear what they were working on. I kept hearing the words “open source” and “FOSS” dropping, and it pulled my attention in. I learned that their idea was to make a social platform to help make it easier for girls to get involved with open source software. The plan was to collect an inventory of open source projects that need help and connect interested girls with project mentors to guide them in contributing.

There was overlap with some ideas I’ve had while working with the Fedora CommOps team towards boosting #WomenInComputing in Fedora’s community. I was anticipating hearing out their idea and seeing what they would come up with!

Their project would be known as OpenCircle. After 6:45pm rolled around, I started packing up my gear to head out for the evening. The OpenCircle team was busy hacking away on laptops or making slight alterations to the whiteboard mock designs they had drawn. It was clear that the creativity and motivation were running high when I left.

I was envious that I wasn’t there for the rest of the evening. Later on that night, Insomnia Cookies delivered to the hackathon. There was also a spontaneous dance party in the atrium of Golisano. Next year, I’ll have to make sure I’m able to stay for the entire night!

After a final push by hackers throughout the night, hacking ended at 12:00pm the next day. After a lunch break, the hackers returned to the auditorium in time  to present their projects. Before the deadline, all the teams added their projects to the WiCHacks DevPost. You can also find the list of projects submitted over the weekend there.

After helping with some other closing work, I wanted to listen to some of the presentations given by the teams. Some people designed some really cool apps, like Pink Planet, Resumatch (a play on Tinder but with resumes), and the ever creative Loocator.

However, the OpenCircle team was the presentation I was looking forward to the most. While they noted that they hadn’t had the time to demo it as completely as they wanted, the idea behind their product was there and it was pretty solid as a prototype.

After the weekend was over, I submitted a simple pull request and filed two issues against the project. I’m anticipating any future development the OpenCircle team collaborates on and seeing where their idea goes!

I was slightly nervous when registering as a WiCHacks volunteer as I had no idea what to expect or the type of community that it would attract. However, after spending time with the volunteers, hackers, organizers, and mentors, it was clear that the environment was inclusive, welcoming, and receptive to all people.

WiCHacks is a well-organized, powerfully motivating event and something more and more people should look into checking out on the RIT campus each year. WiCHacks empowers women interested in computer science to do something awesome in the presence of people who want to see you succeed. The mentorship and leadership at WiCHacks definitely supports this.

Great job to the WiC team for organizing this, and I look forward to participating as a volunteer again next year!

HFOSS: Quiz #1
Analyzing Fedora’s impact at FOSDEM and beyond

On the data refrain: Contributing to ListenBrainz